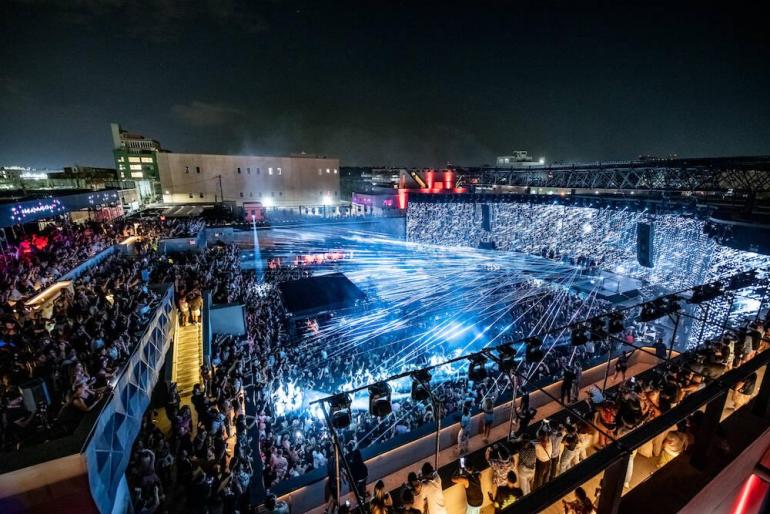 The Brooklyn Mirage announces its largest season-closing series yet after its fifth season filled with performances by top-tier artists, unmatched venue takeovers, sold-out afterparties, and unforgettable nights spent beneath its now-iconic outdoor, 200-feet long and 30-feet high 15k resolution video wall. The East Williamsburg-based venue, which was recently named “Best Large Club” in North America by DJ Mag, will spread out its season-closing programming over a three-week period with a wide range of events.

On October 1-2, the first-ever two-day Cityfox: Transcend Festival will take place, featuring DJ and live sets from a variety of artists, including Ben Böhmer (LIVE), Giorgia Angiuli (LIVE), Henrik Schwarz (LIVE), INNELLEA, Maceo Plex, ONYVAA, Victor Calderone, and many more. A number of Brooklyn Mirage debuts will also take place at the outdoor venue, including performances by the Baltimore-based rock band Turnstile, the British singer-songwriter and multi-instrumentalist SG Lewis, the world-renowned DJ John Summit, who will play back-to-back day and night shows, a sold-out day party with Purple Disco Machine, and the master of improvisation Marc Rebillet. The Brooklyn Mirage will host a spectacular 3-night experience, produced and hosted by Grammy-winning South African DJ and producer, during the third and final season closing weekend of October 14, 15, and 16.

The Brooklyn Mirage extends a warm welcome back to their popular resident closing party Cityfox: Transcend and is excited to share that its signature event will take place over two days and feature 20+ hours of pulsating house and techno to mark the first-ever outdoor summer Cityfox Festival where guests will be given a “festival experience.”

On October 1, the multi-day experience will include a full venue takeover (The Brooklyn Mirage, Great Hall, Kings Hall, and The Village) and nearly 12 hours of nonstop music from artists like INNELLEA, Maceo Plex, Giorgia Angiuli, Henrik Schwarz, Ben Böhmer, and others from 7 PM to 6 AM for a rare Mirage sunrise. On Sunday, October 2, the celebration will go on from 3 PM to 12:30 AM at The Brooklyn Mirage, Kings Hall, and The Village. Four-on-the-floor beats will be provided by Christian Löffler (LIVE), INNELLEA b2b Konstantin Sibold, Spencer Brown, and more. Cityfox: Transcend Festival will also include five distinct stage hosts, including Cityfox, Desert Hearts, Gray Area, and Higher Level, marking yet another first.

Hardcore band Turnstile will begin their most recent North American tour at the Brooklyn Mirage the following week on October 3, and on October 7 SG Lewis will perform his live presentation inspired by the disco era for the first time at the outdoor venue. As Chicago’s professional partygoer-turned-megastar DJ John Summit makes his Brooklyn Mirage debut on October 8 with back-to-back shows for his Off The Grid label showcase, the weekend will pick up steam. John Summit, who was named DJ Mag’s “Breakthrough Artist” for 2021, has shot to meteoric stardom thanks to his constant hits and headlining performances all over the world.


The young DJ has nearly sold out every show he has played since his September 2021 Kings Hall performance, including Avant Gardner‘s Great Hall in early 2022 and the impending Brooklyn Mirage appearance. A second daytime event was scheduled for October 8 after the initial nighttime show’s record-breaking sell-out rate. On October 9, German disco and house legend Purple Disco Machine will perform at a sold-out Brooklyn Mirage premiere. On October 11, viral YouTuber and live improvisation artist Marc Rebillet will join the festivities.

On October 14, 15, and 16, Avant Gardner will host a three-night season finale event with iconic South African DJ and producer Black Coffee as its last hurrah. Each evening will have a different theme, a carefully chosen lineup, and a headlining appearance by Black Coffee. The season-closing trilogy event, which will be held exclusively at The Brooklyn Mirage, will arrive a few weeks after Black Coffee’s wildly successful 20-week H Ibiza residency. It is expected to offer attendees an amazing mash-up of art, culture, variety, and groove-soaked performances.

The innovative artist became a household name earlier this year when his seventh studio album, Subconsciously, won the GRAMMY for “Best Dance/Electronic Album,” becoming him the first African to ever do so. The versatile artist also contributed his gorgeous Afropolitan House vibe to Drake’s most recent studio album, Honestly, Nevermind, for which he is listed as executive producer. It would be an understatement to say that he has had an exciting year. Black Coffee is currently getting ready to start his newest chapter. The South African visionary is prepared to wrap up the most historic Brooklyn Mirage season yet in his trademark spellbinding style, marking his return to the Brooklyn Mirage after his two sold-out headlining performances in July 2021.

The Brooklyn Mirage, an outdoor venue inside the larger 80,000-square-foot Avant Gardner complex, announced earlier this year that it had completely renovated the space. The Brooklyn Mirage now offers a one-of-a-kind 200 feet long and 30 feet high 15k resolution video wall that is topped by a 100 foot custom-built stage roof, upgraded VIP areas, improved viewing from elevated catwalks, and more food and drink options. Their succeeding 2022 season attracted fans and performers from all over the world and offered a special live music experience that was exclusive to Brooklyn.