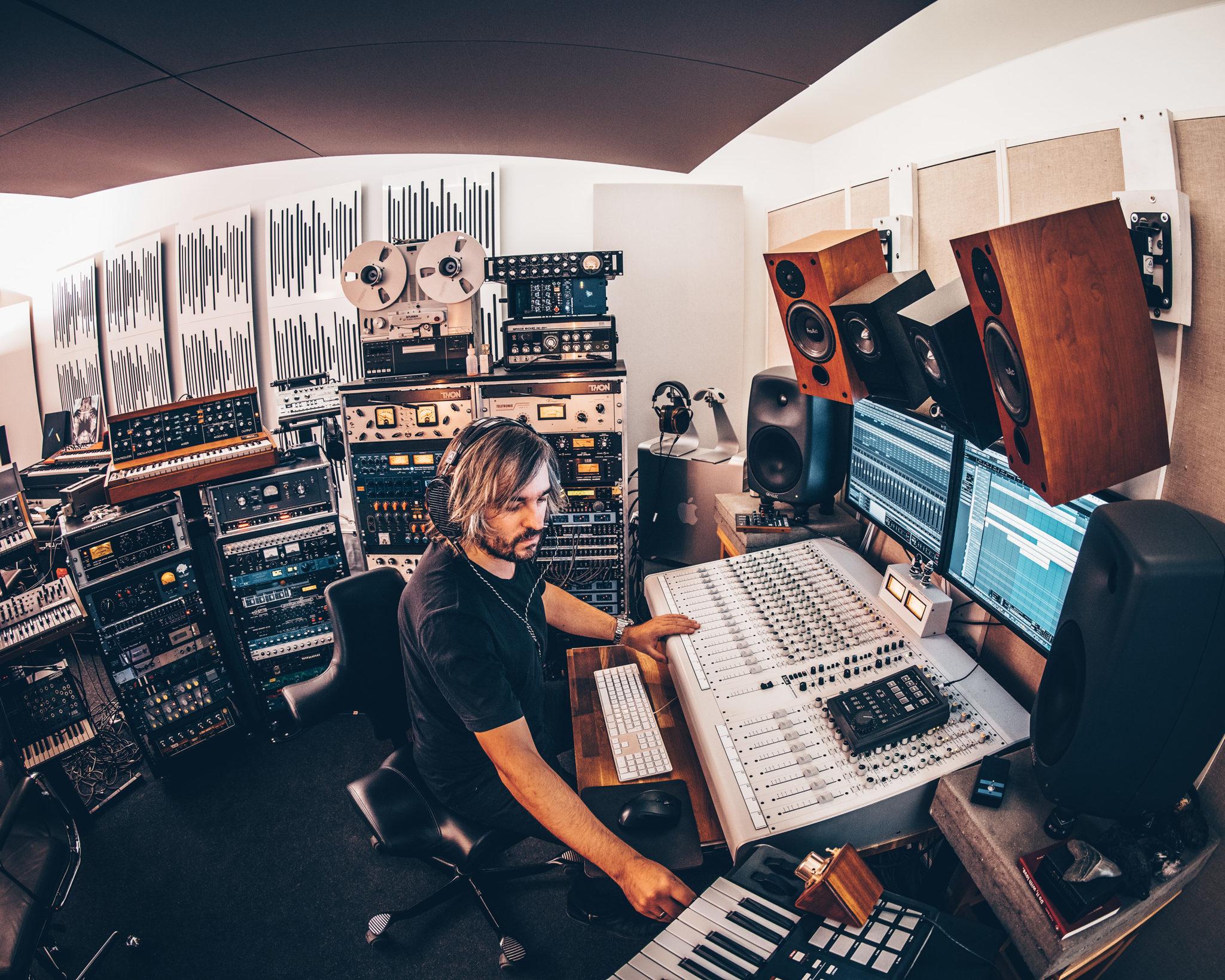 Hannes Bieger, one of the greatest mixing and mastering engineers in Europe, is ready to deploy his new 3-track EP ‘Chemistry’ on Poker Flat so, we reached him out for an interview.

Hannes Bieger operates a high-end hybrid studio in the center of Berlin. From a pure mixdown to tracking, overdubbing, consulting and full production gigs Hannes Bieger offers a wide range of services. He has collaborated with artists from the lights of Âme, Steve Bug, Mano Le Tough. He also collaborated with the Ableton team for the release of Ableton Live 9.

With such knowledge on the argument and massive work over the years in the music industry, we have decided to reach him for an interview. We asked about his studio, gears, what he actually does in the studio, the new release and tons more.

I started playing electric guitar when I was ten years old, playing in bands and all that stuff. In the mid-90s I got more and more attracted in synths and electronic music and at some point, I got an Atari ST with Cubase 2.0 and an AKAI S3000i with 24 megabytes RAM, which was essentially my recording medium. Whatever I did, it had to fit completely into the sampler’s memory! I also had a Moog Rogue, which was my first ever synth, and a Juno-60 at the time. I think this was when I really started producing music, but at first, of course, what I did was far from good enough to be released anywhere. In the 90s I was more into Trip Hop and that kind of music, and the straight bass drum only really came into my life after I moved to Berlin at the end of the decade.

Well, the main reason is I have been collecting for some time already… the oldest piece of studio gear I still have is a Boss SE70 multi-effects unit I bought for my guitar rig, making the money to buy it working on a summer holiday job when I was 14. This was 26 years ago, so plenty of time to build and refine the setup. I really started to get this to a more serious, professional level after 2001, when I had my first releases. I always wanted to have a great workspace for producing my own music, and all the mixing work came only a few years later after people listened to my records and started inquiring about who was responsible for the sound. It was me of course, and so the mixing started to pick up. I never planned this, it just happened. Probably my studio would look a little different when I started to build a new one from scratch these days. I really come from an analog era when soft synths and the likes simply didn’t yet exist, so this all was not based on choice but on necessity. Ultimately these days I think two things are important: The sound sources, the basic ingredients for the music, and the way how you listen to them. This means analog synths and a good recording path to get them inside the box are really crucial to me, and also my monitoring setup, which includes the speakers themselves, the D/A converter, the monitor controller and of course some great headphones. Anything in between, all the EQs, the reverbs, the summing, etc. doesn’t matter just as much in my view. When the sounds are great, to begin with, you don’t even have to do so much to them after recording.

The short answer is: It always depends on the given situation. The long answer is a bit more delicate though. I like and use a few soft synths a lot, but for writing music, for creating ideas I need my analog synths, especially the modulars. I can’t stand working with synths with displays and menu functions, I need everything in plain sight, I like the physicality of the process where you can even close your eyes and just listen and do everything with your hands, with real knobs and switches. But, that said, and keeping my answer to my previous question in mind, and this might come as a surprise for some people – I am mixing my own tracks mostly inside the box! By the time I consider them mix ready I have spent so much time on the sounds and on the arrangement that there really isn’t much to do anymore. The mixdown is basically just a refinement of the previous decisions, and the whole thing sounds so finished already that I simply can’t justify to split it on the analog desk. For the most part, this mixing of my own tracks is also a very quick process that doesn’t take longer than one or maybe two hours tops. But of course, every project is different and a client mixing project with a smaller amount of analog sources can greatly benefit sonically from a full analog mixdown with the desk, EQs, etc. It always depends on the situation, and of course, I love the depth and character of all my analog gear!

For me there’s only one real difference: When I’m producing I am able to choose the sounds and the material from the ground up, and when I am mixing I have to – at least to a large degree – work with what I am given. It’s really that simple. But I have been wearing so many different hats in my career: Musician, instrumentalist, producer, mixer, mastering engineer, even music journalist, that I have adopted a very holistic point of view on producing music that comes into play even when I’m „only“ mixing a track. I don’t really believe in the concept of „fixing it in the mix“. I can pull that off, no problem, but I prefer not having to. Ultimately the quality of the end result is determined by the arrangement, and I’d much rather fix that instead of trying to make it work in the mix. The earlier in the whole process quality exists, the better! It not only makes life much easier further down the road, but it also opens a lot more headroom for the overall quality of the end result. And I think this is why people come to me – I am not limiting myself to only tweak EQ and compressor knobs. Of course, this is an important part of the job, but I always have the whole picture in my mind and I can offer advice, ideas, and strategies based on a lot of experience.

For mixing, I have been relying on Steinberg Nuendo for many years now. I think it offers a very solid audio engine and it has a very even, straightforward sound, and it is also interfacing very well with the analog world outside the computer. I produce my tracks in Nuendo as well, simply because I got so used to it. I like the concept of Ableton Live though, and I plan to experiment more with it for the writing process – my live set is based on Ableton anyway.


It is certainly a great experience to work with other people, and I have the feeling you can always learn a lot, no matter if it’s an incredible production by a famous artist or something that’s more difficult to do by a lesser-known producer – or vice versa. I can definitely say that these numerous case studios on my operating table as a mixing engineer have made me a better producer. There are so many different ways of doing things, but the underlying questions are always the same. What do I have here, where should it go, and what do I have to do to get there? It also taught me to not be afraid of making decisions. Sometimes you tend to overthink stuff, and then you only water it down and make it worse. Through the constant studio work, I acquired the routine and the ability to work fast, make decisions and move on. In the end, it’s a question of confidence, of precision – doing what needs to be done, but not more. The worst part? Sometimes I’m really inspired to work on a new track for myself, and I am sitting in this wonderful studio, feeling like the kid in the candy shop, and then I just don’t have time to do it because I got other work to do…

It’s true that for my „Hannes Bieger“ project since I started to make music for myself again in 2017 I have been mostly revolving around melodic techno and related genres. But I have been doing a huge variety of other genres in my musical life, spanning from rock via acid jazz, trip-hop, deep house to broken beat and even synth-pop. So yes, I do like to experiment! A year ago I released an ambient modular piece on Aeon, and I can see myself doing more of that. But right now I am focusing on my main project and also on the live set, so everything has to kind of fit together for that. If you look at some of my recent tracks like maybe „La Selva“ on Flying Circus, „Stars“ on Bedrock and „El Fuego“ on my upcoming Poker Flat EP ­– I’d like to think that even that is quite a bandwidth in terms of style and genre.

These new tracks are definitely on the darker end of my musical spectrum. Both cuts are heavily driven by modular synths, and my goal was to blur the lines between the elements a bit more than in some of my other work. In terms of the arrangement, some of my earlier tracks have been using quite conventional elements, or better, types of elements: bassline here, chords there, and a melody on top of them. With the new tracks, I wanted to transcend this concept and use modular sounds which are melodic and rhythmic at the same time – tonal percussions on one side, and percussive tones on the other end, if you like. The result is a sound picture that is more electronic and more abstract, this is definitely my most Techno EP so far. But there are vocals, too! I like the contrast between Sailor & I’s voice and the electricity from the Moog Modular a lot.

Hannes Bieger – Chemistry is out 08 March on Poker Flat https://pokerflat.lnk.to/pfr212

Right now I am working on a bunch of tracks that will be released later this year. I will return to labels I have already worked with, but there are also new things on the horizon which are very exciting as well. Last year I started a collaboration with Gui Boratto, who is an incredible producer, and I hope the results will see the light of the day as soon as possible. And of course, I will further expand and refine my live set. But for now, the main focus is on the current „Chemistry“ EP on Poker Flat. I am very happy with this release and I can’t wait to show it to the world and receive the reactions on it!

We really want to thank Hannes for answering in detail to all our questions. You can check in detail Hannes Bieger’s services here as well as his new EP coming out the 8th of March.