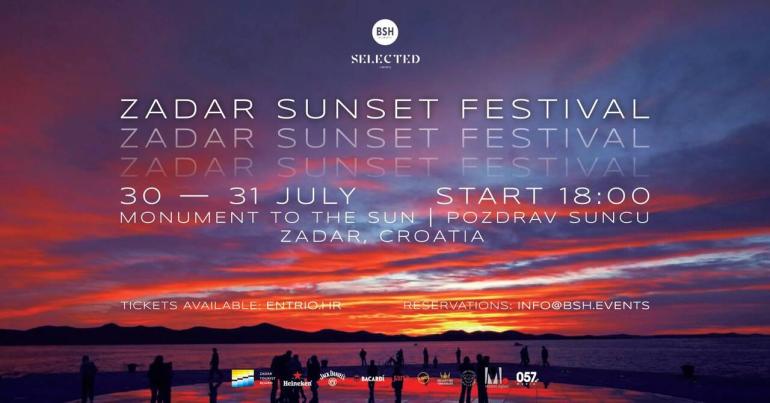 On the 30th and 31st of July 2021, Andrea Oliva, Deborah De Luca, and Kiko Franco will headline the Zadar Sunset Festival, an exclusive two-day party. It’s a small, intimate gathering that invites you to dance to world-class music and soak up the sun’s energy next to a historic monument in one of Europe’s most cultured cities. In the coming weeks, special boat afterparties and daytime beach sessions will be announced.

BSH Events and Selected Croatia collaborated with the Zadar Tourist Board to produce the Zadar Sunset Festival, which builds on the success of BSH Island, Europe’s first post-pandemic festival. The city itself is Croatia’s oldest continuously inhabited city, with famous red-tiled roofs, Roman architecture, fortified city walls, and a number of temples and forums, as well as unobstructed views of the Adriatic Sea.

Zadar Sunset Festival is a cultured event that focuses on creating a one-of-a-kind stage for world-class DJs to create an unforgettable soundtrack. It will bring you together with like-minded people basking in the sun’s energy near the famous Monument to the Sun, and it will undoubtedly be a spiritual journey you will not want to end.

The monument is made up of 300 multi-layered glass plates that have been placed at the same level as the stone-paved waterfront. In collaboration with the nearby Sea organ, an experimental musical instrument that plays music through sea waves and tubes located beneath a set of large marble steps, special lighting elements create a mesmeric and magical light show that creates unity between nature, light, and humanity at night.

Andrea Oliva, the renowned tech-house star, will perform on the 30th, with Deborah De Luca, the Italian techno queen, on the 31st, and Kiko Franco, the Brazilian giant and global top streaming electronic aritst, on the 31st, with plenty of support from local talents Pablo Panda, Yakka, Aldo Morro, and Andrologic. Mony, Ivan Mastermix, Groove Masters, Alvize, Puff Puff-e, Damian Leboss, San Pacho, Neroa, and Edvin are among the artists who have contributed to the album.

This is a once-in-a-lifetime event that will feature two nights of music, culture, and sun worship. Get your tickets here.