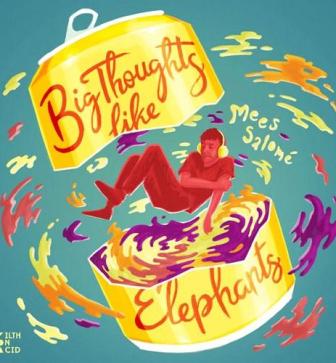 We already introduced you to the Dutch youngster Mees Salomé when his Ya Amar EP got released on Green a few months ago: that beautiful melodic techno masterpiece that “Ya Amar” is really caught our attention, and certainly did the same with Filth On Acid‘s head honcho Reinier Zonneveld, who decided to let Salomé release his debut album on his respected imprint.

Eventually, “Big Thoughts Like Elephants” got a release date, July 27th. Personally, I was very curious to see how Mees would have built an album, with all the ups and downs, peaks and valleys that a proper album requires. My opinion is that he managed to create a journey, a balanced fusion of club weapons and album tracks.

Mees Salomé style is clearly influenced by the masters of the genre such as Kölsch, Joris Voorn and Stephan Bodzin, all melted in an elegant yet humble style. The producer has remained focused on his purpose, never losing himself in pretentious experimentations; some tracks like “Just Thoughts”,”Crybaby”, and the excellent closing track “Sap” manage to alter the mood of the album without distorting the core of the creation. My personal highlights were “Just Thoughts”, relaxing and moody, the long-awaited “Only” and the euphoric “Athereal”.