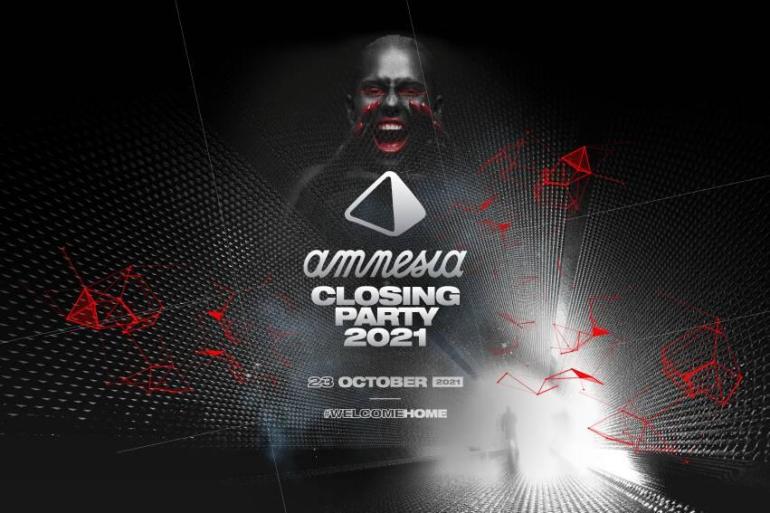 As the positive news begins to flow around the UK and EU, iconic Ibiza club Amnesia lead from the front by announcing its ‘Inverse Season‘, starting with the always unmissable closing party on October 23rd. Sure to feature all the world-renowned superstars you would expect, further details will come in reverse order in the ensuing months.

It’s been a dark year and a whole season was missed in 2020. But that only means the team has had time to work hard on operations and have planned the biggest ever closing with superstars DJs and live acts old and new all planned.

With old and new superstar residents alongside iconic headliners, the multi-roomed spectacular will have something for Amnesia fans of all ages. Jamie Jones, The Blessed Madonna, Adam Beyer, Alfredo, Young Marco, Jayda G, Deborah de Luca, Marco Faraone, Cuartero, Mar-T & Caal, Sidney Charles & Seb Zito, and many more are among the essential lineup.

The Amnesia closing party is the most famous in all the world, often rolling on for 24 hours with many historic sets laid down to the adoring masses on the dance floor. That dance floor is drenched in ice cannons, next-level sound an avant-garde visual production that will awaken your every sense after such a long time away from clubs. Given how much dancing we have missed there is sure to be extra special magic in the air at this party. But be warned, capacity will be more limited than usual so sign up for priority and early bird tickets now, and don’t miss out on your one chance to cut loose and go wild at this ‘were you there’ experience before the club returns in 2022.

With their epic announcements, Amnesia continues to work backward from the season’s end. But this one is enough to get any and all dance music fans excited even before they step onto the club’s massive and iconic dance floor, which is surrounded by cutting-edge production, massive ice cannons, and audio-visual displays that are unlike anything else. The fact that these events frequently last 24 hours is due to the fact that people simply cannot get enough of them.

Amnesia closing and the full lineup

With four rooms of carefully curated music, this sure-to-be legendary closing party begins at 1600 hours and runs until 12 pm the next day. One of them is the all-new 3-D space, which will have its own distinct vibe thanks to Jayda G, Young Marco, and John Woods‘ cultured selections of classy house, techno, electro, and everything in between.


One of the most famous dancing spots in the world is the Terraza. It is a must-see for any true clubber, and for this party, which runs from 18:00 to midnight, there will be special daytime party vibes with a variety of delectable food to make for a unique experience. Musically, Amnesia classics from the one and only original Balearic pioneer Alfredo will be joined by Jeremy Healy, Alex P, and Jason Bye for a spine-tingling trip down memory lane.

Meanwhile, as the sun sets, the party becomes more bizarre, and the music takes on a late-night vibe. From midnight to midday, the Terraza will sway to the sounds of newcomers Jamie Jones and The Blessed Madonna. These are two of the scene’s most important and influential DJs, who know how to work large crowds into a frenzy. Richy Ahmed, Cuartero, Mar-T & Caal, Sidney Charles & Seb Zito, and Luca Donzelli will perform alongside them.

Last but not least, the always brilliantly dark and intense Club will host titans of the scene performing powerful techno. Adam Beyer of Drumcode, as well as Deborah De Luca, Marco Farone, Andres Campo, and Les Schmitz, all perform.

Amnesia will continue to announce its events in reverse order as restrictions are lifted and the global Covid-19 situation in Ibiza becomes clearer so that you have plenty of positivity and good news to keep you going until the big return to the dance floor.

Make sure you’re there because this is going to be another historic night in the ongoing story of Amnesia.

You can find all the info and tickets via the Amnesia Ibiza official website.