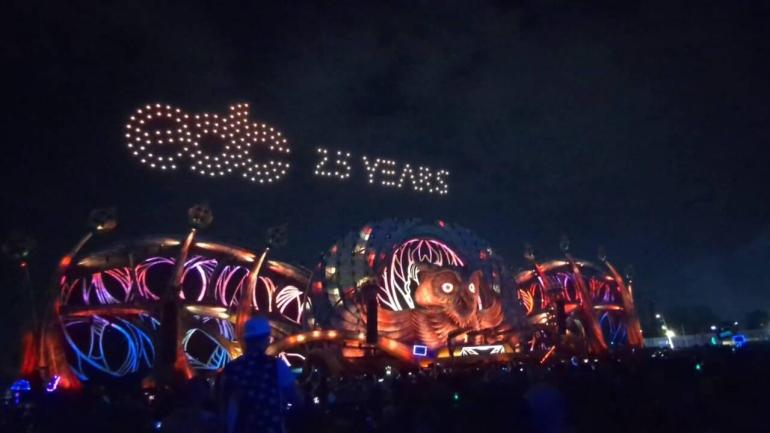 After an impressive edition in Las Vegas, for the 25th-anniversary celebration of the Electric Daisy Carnival flagship event, EDC is now running the Orlando edition. EDC Orlando 2021 marks the 25th-anniversary of the festival and, as in Vegas, Insomniac has decided to bring its unique drone show.

Not only one of the biggest and more exciting music festivals in the world but, Electric Daisy Carnival EDC is now leading when it comes to drone shows.

With a spectacular drone show, Dutch company ‘Drone Stories‘ raises the bar at the EDC festival. Because of the 25th-celebration, everything you could possibly imagine in the realm of entertainment will be shown on the festival ground.

Drone Stories, based in Amsterdam’s A’DAM Tower, and TWOFIFTYK, an Eindhoven-based show creator company, collaborated on the drone performance. Drone Stories is a sister company of the well-known Studio DRIFT, which is attempting to replace polluting fireworks shows with this drone company.

The first drone show proposes again what we have seen during EDC Vegas. It celebrates the 25th-anniversary of the festival. Drones display on the sky the iconic Insomniac Owl logo flying over the main stage evolving into the EDC 25 years logo.

This is just the first show, which is the 25th-anniversary. Drone Stories have planned two additional shows during EDC Orlando 2021.