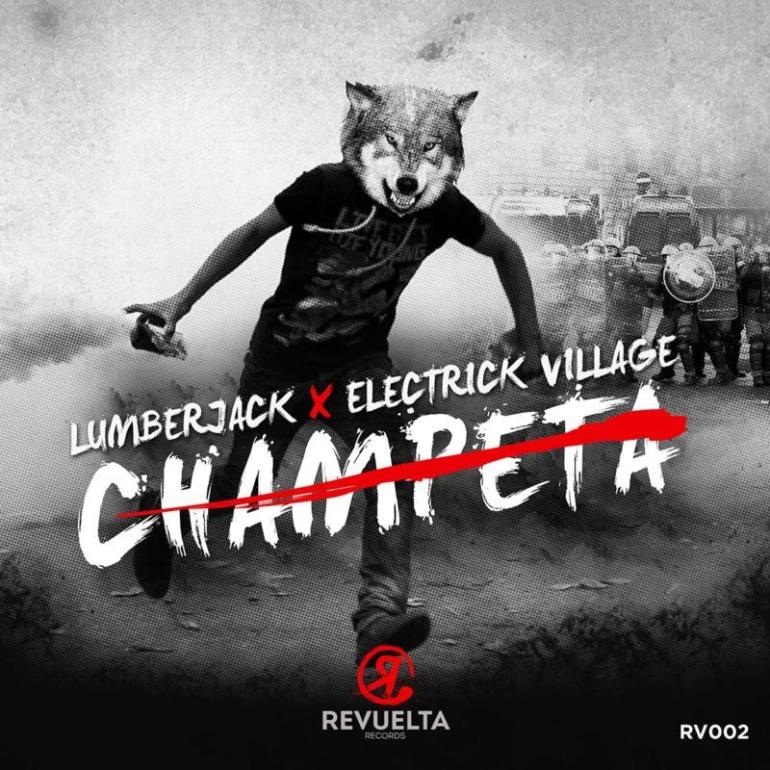 [vc_row][vc_column][vc_column_text]After an amazing first release, Jude & Frank label, Revuelta is back with another banging record, this time by Lumberjack and Electrick Village and it’s called “Champeta.”

Revuelta, the new Jude & Frank imprint, has entered the music industry scene in full force with Styline and Jude & Frank collab “Pina Colada” and they don’t want to stop anymore with another massive release! The new release,”Champeta.” features an amazing children voices vocal driven by an energetic and groovy percussive rhythm. All the energy encapsulated in the wonderful break is deployed on a powerful and fast drop made by hitting percussion, heavy baseline and strong kick.

The new release is a collaboration by Lumberjack and Electrick Village, two well-known DJ and producers in the groove field. Directly from France, Lumberjack is an eclectic duo with a lot of great releases on their catalog. Last year they have signed with KIDS Records for “Outlaw” and they have also released a free download revision of Axtone’s classic “Together.” We had asked them a few question about the release and their upcoming project:[/vc_column_text][vc_column_text]

[/vc_column_text][/vc_column][/vc_row][vc_row][vc_column css=”.vc_custom_1518431856888{background-color: #ededed !important;}”][vc_toggle title=”When did you first meet Electrick Village and how was the collab born?” open=”true”]Champeta was an unfinished track that we really wanted to finish but we couldn’t quite get it right. After an online meeting with Jonas and Marinus we sent them the track and they decided to do a collaboration. They sent us a new version and we were really excited by it!

At ADE we all met to talk about the new track and where to sign it. A few days we met Jude (Label owner of Revuelta) and that answered our question. We were very happy to release on Revuelta![/vc_toggle][vc_toggle title=”Revuelta Records is a brand new label but it seems like they have planned ahead. What do you think of the label and why did you sign with them rather than a more established label?” open=”true”]Revuelta is for Jude & Frank a real state of mind, and a label where they want to sign friends and create good music that they love! For us, it’s an honor to be the second release on Revuelta. They manage everything on the label, and we know it’s a huge challenge! They asked us for everything for the release, from the cover to the promo and we totally like their style! Also, we really love the work of Jude & Frank, so we didn’t hesitate to sign with them!


For us, it’s better to sign on a dynamic « newcomer » label who wants to make their mark, instead of signing a release on an ‘older’ label who didn’t always push the music and only want stats. It’s difficult actually to unite this two elements but we are really proud of the support on that one![/vc_toggle][vc_toggle title=”Do you guys have some plans for the future? New tracks, also MMW is really close” open=”true”]We are actually renewing all the Lumberjacks stuff! After 4 years, we decided to make a come back with lots of new editions: new press shots, new music and a lot of surprises!

We have lots of tracks coming in the next months on different labels like Glorie, BMD Ψ Friends, Get Down, Black Lizard, a follow up on KIDS and of course, a track on Groove Cartel! But more than that, we have prepared lots of collaborations with DJ’s like Havoc & Lawn, Jude & Frank, Enyone, Mr. Sid and singers like Chris Willis, Max C, Sanjin, MC Spyder to name a few…

This is for us the year were we gonna try different things, we don’t want to make only one kind of style, we want to release what we like in House, Progressive, Future House & Pop cause « We don’t give a fuck about genres » and we are really excited to show you everything![/vc_toggle][/vc_column][/vc_row][vc_row][vc_column][vc_column_text]From the cold Copenhagen, Electrick Village are another DJ and producer duo. They have released on respected music labels such as Hoist, Arcadia, and King of Drums Records (Genairo Nvilla label). One of their track was also featured on our monthly IDs Only podcast.

The incredible skills o those four guys came together to giving life to the amazing new record which is already supported by names like Bob Sinclair, Fedde le Grand, Max Vangeli, to name a few.