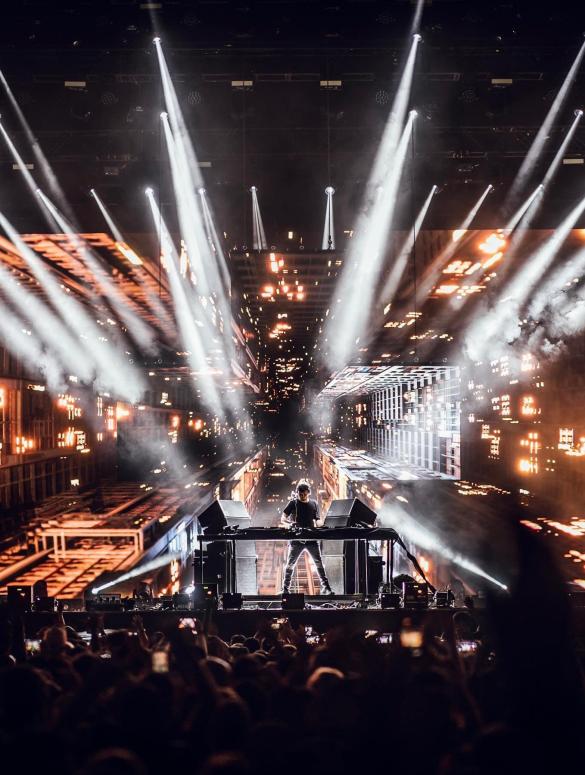 Featuring artists such as Zedd, Brooks, Mesto, Matisse & Sadko and tons more, ‘Sentio’ is Martin Garrix full club album to be released at the end of April.

Martin Garrix has been premiering one club ID after the other during his live shows over the last couple of weeks; this series of new music comes after not releasing any club songs for the past two years due to the pandemic. Released as singles in the past and in the following few weeks, the collection of songs will form his first-ever club album, ‘Sentio,’ which will be available on April 29th.

The crazy thing is I’ve never released a Garrix album. During COVID I made zero club music because it felt weird to make festival music when there were no shows. When the shows came back I had so much new, revived energy that I made tons of new club music. We’ve decided to release a lot of the tracks in the coming weeks and bundle them into a club album. I feel like people have collected new energy the past two years, and I can’t describe how amazing it feels to be back on tour and seeing everyone’s reactions to all the new music. – Martin Garrix

During his sets at Lollapalooza Chile, Argentina, and Brazil, as well as the Ultra Music Festival in Miami, Garrix debuted a slew of new IDs, prompting fans to begin guessing the tracks and feature artists. The majority of these IDs will be revealed one by one over the next few weeks.

‘Sentio‘ means to perceive, feel, or experience. Everyone’s senses were put to the test during the pandemic, but now that the world is opening up, it’s time to put them back to work. This is exactly what Garrix hopes to achieve with the club album and visual accompaniment: to reach every sense in your body.

Martin Garrix is ready to shake up the festival season of ’22 with his brand new live show, also known as ‘Sentio,’ and the club album, which will be slowly revealed over the next few weeks.

The first record to be released has been ‘Follow,’ his highly anticipated collaboration with longtime friend Zedd. Up next, the album’s second track, ‘Limitless,’ Martin Garrix returns to collaborate with Mesto after six years. ‘Limitless,’ which transports us back in time, has a nostalgic feel while remaining contemporary. ‘Limitless,’ which debuted during his live shows over the last few weekends, had the audience going crazy, accompanied by a visual spectacle.

For the first time, Martin Garrix collaborates with Vluarr and proves to be an excellent match. The upbeat track, Reboot, has an exciting and irresistible groove that makes you want to get up and dance right away. His recent Instagram post, which features a video of him performing the track in Buenos Aires, attests to this.

A long-awaited reunion: Martin Garrix and Brooks collaborate on Garrix’s second release of the week, ‘Quantum.’ After the first live spins, ‘Quantum‘ quickly became a fan favorite as one of the most requested IDs following his Ultra Music Festival Miami set. The track is an outstanding banger with an infectious drop, as expected from Garrix and Brooks.


The observant viewer may have noticed the two spending time in the studio together on social media, and the end result is finally available for everyone to hear.

Good Morning with Matisse and Sadko.

‘Good Morning‘ sees Martin Garrix teaming up again with good friends and frequent collaborators Matisse & Sadko, one fan-favorite after the other.

The track, which has been used as the opening track for his recent shows at Lollapalooza Chile, Argentina, Brazil, and Ultra Music Festival Miami, among others, sets the tone for his high-energy live shows.

Matisse and Sadko are no strangers to collaboration, having previously collaborated with Garrix on his final release of 2021, ‘Won’t Let You Go.’ It should come as no surprise that they have mastered the blending of their sounds to perfection, yielding an instant classic-sounding result.

Anticipated by many, the sixth release in a row from Garrix finally makes place for his collaboration with DubVision and Shaun Farrugia on ‘Starlight (Keep Me Afloat)’. Mixing their chord progressions seemingly with the powerhouse production qualities, ‘Starlight’ is a track that possesses some incredible magnitude. The heartfelt vocals of Shaun Farrugia complete the ensemble.

Martin and I crossed paths unexpectedly through a mixture of TikTok and a mutual friend, Albin Nedler. From day one, the synergy in the studio was like no other, and I think you can hear it in the records. Starlight is a record written with love and honesty, honest in its lyrics, but also honest to all of our styles. I hope you love it as much as we do! – Shaun Farrugia

Discovering Shaun on TikTok, Garrix reached out to him not long after to create music together. Connecting in the studio immediately, Shaun can also be heard on another ‘Sentio‘ track that will be released soon.