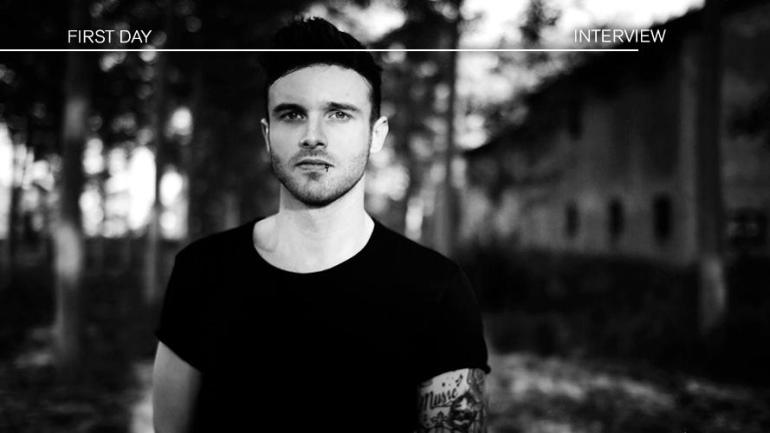 First Day is a producer that is doing so well in the last period, so we decided to have a chat with him and asking some questions for an interview!

Hey man, how you doing? First, what’s your name and where are you from?

I’m Alessio, I’m 28 (maybe 25 without my beard) and I live in Italy, near Mantova and Reggio Emilia.

When did you start producing music and what gave you the input to do that?

I started in 2008, the time of minimal techno boom. I started producing music just beacause I wanted to concretize my personal taste in club music…I’ve always been very critic on other people’s music and I rejected tracks just because of a hi-hat or sample that I didn’t love particularly, and I still do, so it was a real need. In the beginning I produced a lot of crap, but through the times I learned to know myself and my skills.

So you’re definetely one of those musicians who have to listen to a track dozens of time before releasing it?

In fact you have released few tracks as First Day…

Yes, this is due to my strictness and to the fact that some singers made me lose time…now a track have to be 110% perfect, otherwise it has no reason to exist. In the underground industry you have to release loads of EPs and B-sides, while in the EDM circus one good track is enough to show how good you are.

Talking about underground, I know you also have a tech-house alias, Heartik. What can you tell me about it?

Well, Heartik born the same night I had to sign my first contract with a label, I had too less ideas and too much music at the time (laughs). The project evolved in different ways, sometimes techno (I had contacts with Enrico Sangiuliano, Umek, Harvey McKay and others), sometimes tech-house (Sebastien Leger,Format:B,Popof…) and sometimes experimental (my track Orphan Planet [released on Outpost] was premiered on Eric Prydz’s Epic Radio). I’m trying to find time to restart it, I know that people expect new music but at the moment I’m totally focused on First Day.

Let’s get back to First Day…how’s working with NEW_ID? You did two tracks with him and a remix for “ADA”.

We are good friends and we are musically similar, so working together is very natural. There isn’t much people as authentic as him, and those are the ones who make you both grow. Good music is made of knowledge and different opinions and ideas, if you feel already successful you completely misled its meaning.

I guess there’s more in the making with him, hoping in the release of Lovestruck…

Well, we often help each other, so it’s a constant workflow…regarding Lovestruck, the answer is yes. It will be released soon, but not as soon as the fans could imagine.

Getting back to you, do you play any musical instrument?

I’ve always been a self-taught musician, and I’ve been playing the electric bass since I was 14. I use to delight myself by playing the guitar or the piano just to make my tracks’ structure, and I sometimes sing, maybe to create guidelines for professional singers.


So you work more with the software part. Which DAW do you use?

I started with Logic Pro, which is the only DAW that let me create and arrange my sounds clearly, and actually I’m still using Logic Pro 9.

What about hardware? Do you use any synthesizer or drum machine?

I used the Native Instruments Maschine in the past, but I no longer do. That’s because I need the fastest resource to put down ideas and search for samples. One of the inspiration’s enemies is the waste of time, and even a few moments can be enough to make disappear the idea, so you have to concretize it immediately. Regarding synths, I feel good with modern softwares’ quality, but you have to mix the sounds wisely.

I’ve got them both but I hate working the MacBook, so iMac.

Which figures influenced you as an artist and as a person?

I have never had great idols…my influencers have always been those ones who are able to sacrifice a lot in what they believe or those who keep fighting, careless of the adversities. Musically talking, if I have to name a few artists, I would say Daft Punk and Giorgio Moroder: they are true pioneers and the way they guided the market during the years is just perfect.

Axwell, for obvious reasons. And the other one is Ryan Tedder.

Huge thanks to Alessio for this interview! Check out his top tracks: