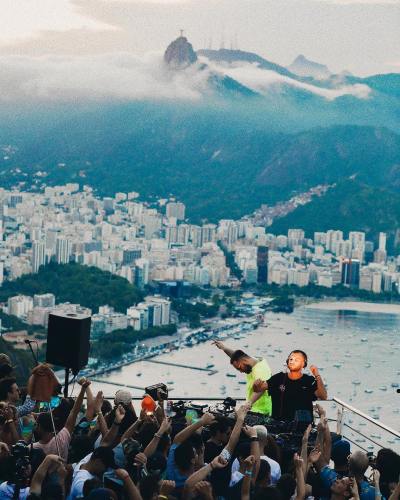 Another Monday, another Cercle invites; to be precious, this time the party was postponed to Tuesday because of bad weather condition. Luckily, yesterday, the weather on the top of Sugarloaf Mountain in Rio de Janeiro, Brazil was perfect.

Nothing but sky, a small blanket of clouds moving around the mountain and an unbelievable view on Rio de Janeiro; this is what you would have seen if you were there. Luckily, Cercle streams the headlining performance live on Facebook so, you can now enjoy the 1 hour and a half set directly from your couch.

Kicking off with an incredible ID supposed by Rampa X WhoMadeWho, ARTBAT has continued their incredible set with soft and gentle vibes, filled with rolling percussions and wide bassline. From ARTBAT discography to tons of exclusive and never played before ID, the Ukraine duo has delivered another impressive set, in the true Cercle style.

Rising 396 m (1,299 ft) above the harbor, Sugarloaf Mountain name is said to refer to its resemblance to the traditional shape of concentrated refined loaf sugar. It is known worldwide for its cableway and panoramic views of the city. Sugarloaf Mountain became part of a World Heritage Site declared by UNESCO in 2012.

From late afternoon to the sunset, Cercle invites ARTBAT has been another perfect performance for both artists and Cercle crew. The full ARTBAT performance is available below on Facebook. It will be uploaded in the next days on YouTube too for full video quality.