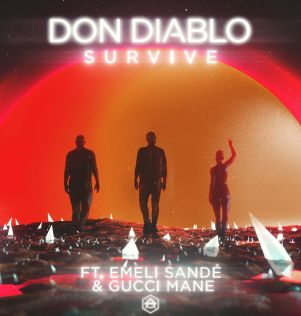 Don Diablo, probably the most active DJ and producer in the dance scene, is back on his own imprint HEXAGON, with a brand new single called ‘Survive’ which features Emeli Sande & Gucci Mane.

Kicking off with Gucci Mane voice presenting the artist, the record immediately starts with the wonderful voice of Emeli Sande driven by one of the greatest basslines we heard in a while. ‘Survive’ continues with the rapped part by Gucci Mane everything driven and mixed by the absolutely mindblowing production by Don.

Don Diablo teams up with Emeli Sande & Gucci Mane for his brand new single ‘Survive’ out now on HEXAGON.

The record is really something out of the schemes: it’s not the typical EDM track you can expect from Don Diablo; it’s a mix of various genres perfectly merged together. The pop-vocal by Emeli Sande merged with the rap part by Gucci Mane and the incredible skills in the electronic music production field by Don make ‘Survive’ a track unique of its genre and totally different from the usual vibes we are used to hearing in the last period.

We’re not a fan of rap/hip-hop or commercial and pop stuff but, this record is something else. We would be very happy if Don Diablo, in the future, will release the instrumental version.