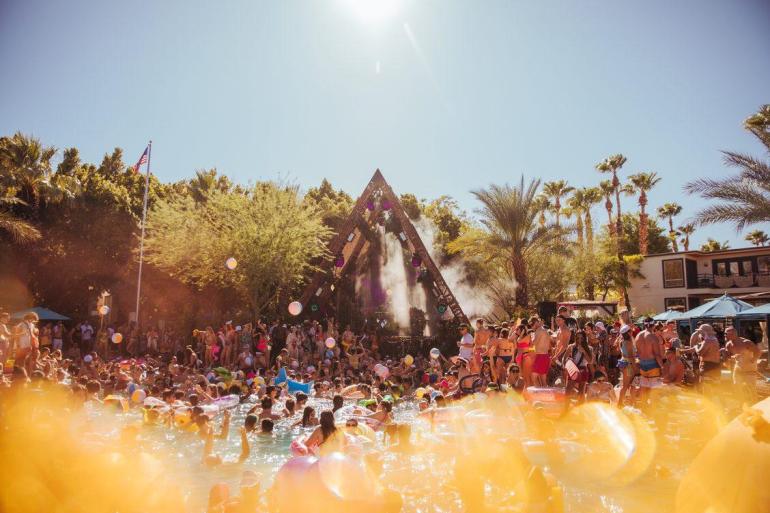 Splash House is back at the Three Resorts in Palm Springs, California for the August 13-15 and 20-22, 2021 Double Weekender. In short:

About the event Splash House

Splash House is returning to Palm Springs this August to celebrate its eighth summer and the happy reunion of its fun-loving community. Splash House is a well-known destination for music fans and festival goers because of its forward-thinking dance music curation, poolside parties, and resort amenities. Splash House has announced the lineups for its first double weekender, which will take place August 13-15 and 20-22.

The event, which takes place across three resort hotels – Renaissance, Margaritaville, and Saguaro – transports guests between bespoke pool areas and iconic stage-facing balconies. It’s the ideal blend of comfort and day-to-night dancing, with After Hours programming taking place alongside planes under the desert stars at the Palm Springs Air Museum. Splash House festival passes are combined with hotel reservations at one of the three host resorts in hotel packages.

Every summer, Splash House adds to its lineup with a mix of headliners and up-and-comers. Claude VonStroke and Green Velvet super-duo Get Real, Australian forerunner Dom Dolla, French 4/4 anthemist Shiba San, Toolroom’s Mark Knight, and the illustrious Moon Boots are among the guests for Weekend One (DJ Set). DJ Holographic, Eskuche, Dateless, Lubelski, Sohmi, and others from Detroit will be carrying the torch for the next generation. Multi-genre stylings from TOKiMONSTA, Whethan, Seb Wildblood, Poolside (DJ Set), and a Tycho DJ Set round out the bill.

Splash Mates transform from hotel partygoers to After Hours legends at night, taking over the Palm Springs Air Museum’s nostalgic open-air haunts. Lane 8, Green Velvet, and Mason Maynard will make their runway debut on weekend one, followed by MK, Cloonee – who will perform at both the pools and After Hours – and a special guest on weekend two. It’s one of the coolest places to dance and enjoy the desert breeze, surrounded by hangers and vintage planes.

Splash House is the ultimate stop for west coast dance music fans, combining the natural beauty of Palm Springs with quality programming and immersive production. It’s the ultimate summer getaway you’ve been fantasizing about for the past year…

For access to the Splash House On Sale, you must register at splashhouse.com. On Sale begins June 17th at 12pm PT. Guests must be 21+ to attend. Passes start at $159; After Hours passes start at $60. Hotel Packages available at all host hotels starting at $300 per person.