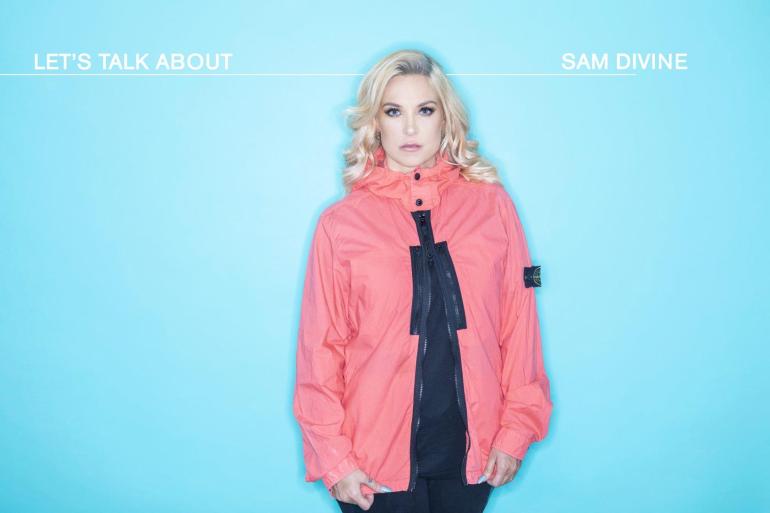 Sam Divine is a DJ that knows exactly what to play and when to play it. The hours she spent rifling through vinyl in the warehouse of Chemical Records, where Sam once worked as a house buyer, gives her an insurmountable understanding of the genre. Having played nearly every club in Ibiza – including residencies at Ushuaia, Amnesia and Sankeys – and landed at top-end festivals, there are few who can offer a house music education like Sam Divine. Her reputation for energizing a dancefloor has been acknowledged by her inclusion in Pete Tong’s Selector Series for Radio 1.

Thanks to the Defected Records PR team, we got the chance to have a brief chat with Sam at their ADE event, where she played alongside Ferreck Dawn – who we interviewed as well -and many other House Music heavyweights such as Todd Terry and Claptone.

Wow, that’s a tricky question, it was so long ago… I think it was more progressive house, probably a CD from Sasha & John Digweed. I guess it was around ’98… At the time I was more into Hard Dance and Drum ‘n’ Bass, so that was probably the one that introduced me into House.

I had a couple of friends who were DJs, and a very good friend of mine worked in a record shop. We used to have a lot of afterparties and stuff, so he decided to teach me how to mix. I got myself a pair of belt-drive decks and a mark 2 channel mixer, and I used to go to his record shop diggin’ for Hard Dance and Trance records… and I’m self-taught.

Well, I first met Simon in 2007; I used to religiously go to the Defected parties at Pacha every single Tuesday, and, at that time, I worked in a records shop in London, which was frequented by Defected A&R Aaron Ross, so thanks to him I managed to meet Simon at Pacha’s backstage. I was literally going at Simon like “Oh, can I have some Defected promos”, so I must have been that annoying girl that every week popped in front of his face, but I eventually managed to plug my way backstage. So yeah, I just hounded Simon for two years and finally got signed. Before being a DJ for Defected I worked as their Ibiza events manager, and previously to that, I was part of what they called the “Defected street team”: I was relegated back to the office collecting information and stats about Defected releases. So it was a long journey until I got signed as a DJ in 2009.

I think that the House music scene has always been strong. I’ve been cruising in my lane for about 15 years now, and I’ve never had no work or lots of, it’s constant you know, I’m playing every single weekend all over the world, so the demand for House Music has always been constant. I think it’s more a matter of genres: right now Tech House is big, five years ago Techno was big, ten years ago Minimal was very big, so everything just goes back underground, there still is a massive underground scene, even if people don’t see it. People tend to jump from genre to genre, but that’s not my case: House Music has kept me busy every weekend for the last 15 years. So for me, House Music hasn’t changed, it just goes through stages like any other genre; everything does a full circle in like 20 years, and now we’ve seen a resurgence in the DJing scene, there are more female DJs, more DJs breaking through, so it’s more in the magazines, more advertised. The House music scene right now is really thriving, and Defected is completely champion in that, because we’re selling out parties all over the globe, just look at Defected Croatia or our Ibiza residency: there’s a massive demand for House music.


So, I’m really honest about this, I’m not a producer, I’m a DJ. Simon Dunmore has been my mentor for over 10 years and he always taught me from day one that, unless you’re making constantly Top 10 records on Beatport, you have to craft your skills as a DJ; and that’s what I did, I’m living proof that you can still be a DJ and still making it in the industry, and I think that gives much inspiration to a lot of people. So, when I collaborate with people like CASSIMM or Curtis Gabriel, they build the skeleton of the track then I put my touch with ideas or references of tracks that I really like. I’m more about the arrangement and the vocals part, and my experience as a DJ helps me crafting what I think could be the perfect shape of the track, which is then written down by my professional engineers. So I’m totally fine with telling the world this: I’m not a producer, I can’t sit in the studio and playing keys or stuff, but I really enjoy the arrangement part, that’s when the track comes to life.

What Music to Choose for A College Dorm Party

My favorite producer and DJ right now is Riva Starr and his Snatch! Records. I love his label and everything he produces, be that House, Techno or Disco, and he just dropped an album on TrueSoul: it’s just amazing, it shows how much a talented producer he is. Then there’s Safe Music: I’ve been following them since my Soulful House days, they’re a really good label. Then Soulfuric, (which has recently been re-launched by Defected – E.D.), Kerry Chandler’s Madhouse Records and Josh Butler’s Origins.

(Laughs) Oh, have you got an hour?

So, my top three will be the following. Jordan 6 Infrared, which were gifted to me by a friend for my birthday and made me start my Jordan collection; my second favorite pair are the Jordan 3 True Blue, then my third ones would be the Jordan 3 Black Cat. I actually bought a pair of those in LA this year, cause I couldn’t find anywhere in the whole entire world in my size, and I bought them half a size too small so I can’t even wear them, but they look really pretty in my sneakers collection room.

We’d like to thank the entire Defected team for having us in Amsterdam, and of course Sam Divine for the time dedicated to us.