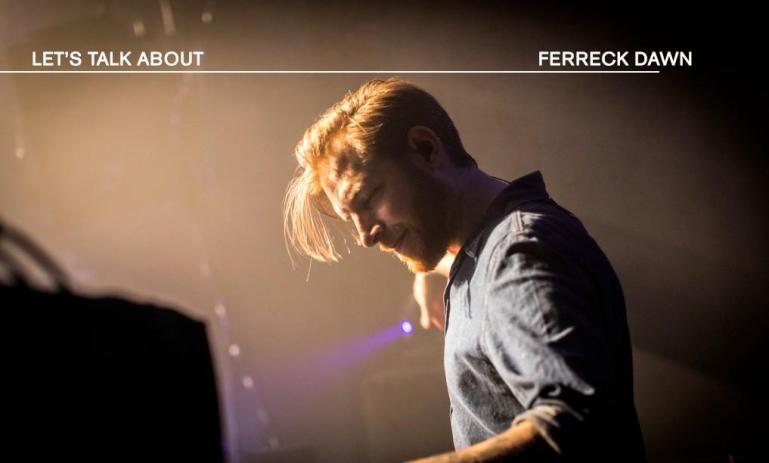 Defected Records, the most prestigious House Music label in the industry, has hosted a wonderful ADE party at Stadspodium, Amsterdam. We were there and we had the opportunity to have a chat with Ferreck Dawn.

A DJ and producer with almost 20 years of experience, Ferreck has released many successful tracks on Spinnin’ Deep, but lately, he moved to more club-oriented productions, as its’ successful Robosonic collaboration “In Arms“, which has been one of the most played tracks of this summer.

Hi, I’m Ferreck, and I’ve been djing for about 17 years, now it’s for 4 years a full-time job. I did some tracks on various labels, lately on Defected, so I hope we can continue on this path. I’m super happy that they booked me for this event because there’s the chance to meet and talk with everyone at ADE.

Well, I visited Sensation White in 2001, I was 16 at the time, and that’s when I figured out that DJing was what I wanted to do, so I started DJing. I used to play more hardcore stuff in the beginning, then I moved into House music. About 12 years ago I started producing my own music because I realized that it was needed to play in different countries.

It’s not particularly one – I use a lot of vocal sampling, preferably female vocals from R&B and soul that have been cleaned or re-sung, because I love the vibe and the energy that these genres have, it perfectly matches House music. So my inspiration comes from a genre instead of an artist.

Sure… “In Arms”, my collaboration with Robosonic, born when he sent me the first idea of the tune, which was a dub version of it. I added vocals and piano, so the version you can hear now is my took over his version… we were lucky that it did so well, we’re very happy with the result.


Regarding “All Nighter”, I played it at Tomorrowland, then I met the vocalist, Shyam, and he told me that he wanted to do something together so I sent him the first draft. After he sent me the vocals, I forwarded all to The Deepshakerz, and eventually, we came up with the final result.

The impact of listening to podcasts on learning effectiveness

Yeah, we got in contact last year when I reached out to tell him that I really liked what he was doing and to ask him if he was interested in doing something together. We came up with “Old Dollars” on Spinnin’ Deep, so we told each other “why not doing a couple more?”, and we ended up having ten collaborative tracks. Of course, we’re friends as well because we talk to each other all the time.

Before Spinnin’, I used to be underground. I released stuff on Toolroom, Material, and I also used to make tech house. After I got signed to Spinnin’, I had to adapt to the style of the label by making more commercial stuff, but then I started really hating it. So the stuff I did in that period, for example, the track with Joe Stone, were decent productions, but I didn’t like them especially when I had to play at festivals; as a DJ, I didn’t like the direction I was going, so I reached a point when I told my family and friends “I’m so fed up with this kind of music that I could quit”. So we arranged a meeting with Spinnin’, and the guys from the label were very comprehensive: they told me not to feel forced to produce music that I didn’t like anymore. This happened two years ago, and that’s why I started making House music again.

Actually we don’t know yet… We wanted to make an EP on DFTD which will contain “Lovers & Haters” as well, so we’re working on the second track. I’ll know more about it as soon as we finish that one. Also, I have a solo track coming on Defected at the beginning of next year, and I’m pretty excited for that because I’d like to show to the Defected fans that I can also produce on my own, since I did only collaborations with Robosonic on Defected.

By the way, my relationship with Defected is still young, I’m pretty new to the label but I can see the familiar atmosphere around it, so let’s hope to become part of the family in the future.

We’d like to thank Ferreck Dawn and the entire Defected team for hosting us at Stadspodium during their ADE party.