For a few years now, the popular tracklist site, 1001tracklists, publish an annual ranking; you may argue that we already have the DJ Mag Top 100 that, inevitably, every year creates a debate for the top position. 1001tracklists’ ranking system, instead, is different from the annual DJ Mag poll. The ranking is automatically generated accordingly to the number of an artist’s track has been played across radio shows, performances, mixes and more. In practice, this method evaluates how many time one track has been played.

1001tracklist is based on real data but, of course, as the Top 100 Dj Mag is not perfect. As every DJ mixes, radio show and podcast are counted equally, a track played during the Swedish House Mafia reunion in Stockholm is equal to one played on an anonymous podcast with 50 plays, as soon as it’s on 1001tracklist. This is also the reason you may find some, not so famous names on the ranking.

Anyway, on the first spot, David Guetta leads the ranking with 1721 support thanks also to his Jack Back alias; mr. Guetta is rapidly followed by Tiesto and Skrillex. On the 4th spot, Axtone’s head honcho Axwell follows with 1564 supports. Interesting to see Mr. Sid at the 15th spot, +47 spots from last year as well as Jack Wins at the 28th (+62) and Mark Knight with +33. Interesting entries for this year are for sure Alesso at the 49th, Sonny Fodera at the 58th, Yotto at the 80th followed by ARTBAT, Cristoph, Dave Ruthwell, Gorgon City, Kolsch, and MK between 80 and 100.

This year features 30 new entries as well as 7 artists returning to the rankings. Tune in on Thursday as we celebrate this year’s Top 101 Producers at ADE. More than 20 artists from this year’s rankings will be performing exclusive b2b sets in what is shaping up to be a can’t miss event! The event runs from 17:00 – 21:00 CET and will be available on Facebook! 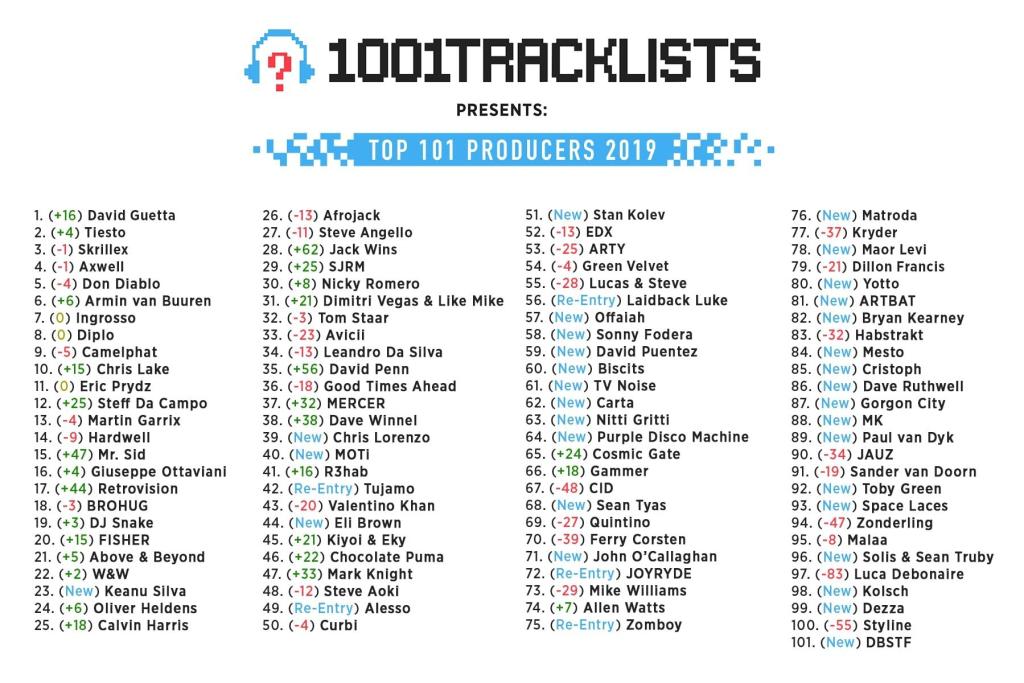