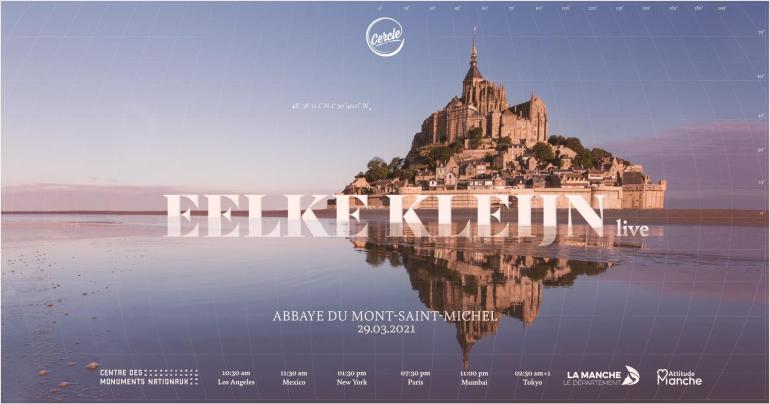 Today (March 29) at 7:30 pm CET Eelke Kleijn will be playing an exclusive live set atop the Mont-Saint-Michel in France. A concert with no on-site audience produced and broadcasted by Cercle in collaboration with the Departmental Council of Manche, Attitude Manche, the National Public Establishment of Mont-Saint-Michel, and the Centre des Monuments Nationaux.

A musical performance broadcasted around the world

Broadcasted live at sunset, the concert will take place at 80 meters on the West terrace of the Mont-Saint-Michel Abbey, one of the first French monuments to be listed as a UNESCO World Heritage Site. Overlooking the bay and the century-old alleys, this architectural feat made in Normandy is a testament to the unique know-how that has existed here since the 8th Century and has made it to this day, one of the most beloved sites in France.

Along with the performance, the Artist will be filmed from all angles by several cameras and drones. The concert will be broadcasted live on Cercle’s Facebook and Twitch pages. The live performance will be followed by an interview of the artist where the online audience will be able to ask their questions.

Eelke Kleijn is a rare talent. With work stretching across movie trailer scores, deep live shows, and incredibly well-formed production, he crosses a boundary from electronic producer and into a true modern-day composer.

He’s an underground artist, but one who has effortlessly made the jump into the wider world when the time and opportunity have felt right. His remixes for the likes of John Legend, Pendulum, and James Newton Howard & Jennifer Lawrence are testament to his ability to reach wider audiences without giving up on his core values.

Cercle is a French media dedicated to promoting artists and venues with exceptional production. Our goal is to raise awareness around art, cultural heritage sites, and great sceneries through the two noble and federating arts that are music and video. Every other Monday, an artist plays a 1-hour concert in a unique setting, followed by an interview via Facebook Live. Cercle has already collaborated with multiple venues like the Eiffel Tower, the Giza Pyramids, the Atomium, the Griffith Observatory, the Fontainebleau castle, the Chambord castle, and many more.

You may be interested in the stunning Cercle event with Mathame in Mexico here.