Defected embarks on a new era of virtual clubbing on Twitch 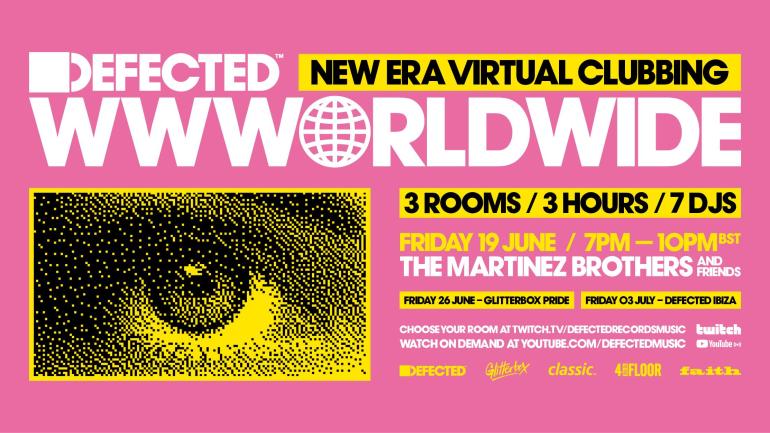 Defected has revealed plans for further virtual events, introducing innovations to build on the colossal success of its 9-week Virtual Festival residency. The new Defected WWWorldwide series will see three weekly events from Friday 19th June – 3rd July, reflecting the house music heavyweight’s summer of well-loved club events that have been postponed due to the global pandemic.

Partnering with Twitch to use its ‘Squad Stream’ function to stream music events for the first time, Defected WWWorldwide events will feature three virtual rooms with DJs playing concurrently in each, as they would in a nightclub. For Defected WWWorldwide’s first event on Friday 19th June, house music titans and fellow New Yorkers Louie Vega and The Martinez Brothers will headline in Room 1, with Eli Escobar and Luke Solomon in Classic Music Company’s Room 2, plus much-loved Defected resident Darius Syrossian and more to be announced in Room 3.

The final event on Friday 3rd July will take the Defected WWWorldwide audience back to Ibiza, with Ferreck Dawn and Sam Divine in Defected’s Room 1, Mambo Brothers, David Penn and Manu Gonzalez in Café Mambo’s Room 2, and Mike Dunn and Terry Farley in 4 To The Floor’s Room 3. Adapting Twitch’s gaming functionality for the purpose of bringing people together through music, Defected WWWorldwide will get even closer to a real clubbing experience, allowing viewers to dip in and out of different rooms at leisure, like choosing a stage at a festival. As with previous Defected Virtual Festivals, sets will be uploaded to watch back on YouTube in full HD directly after.

The Virtual Festival series was Defected’s answer to worldwide club closures and events cancellations in March 2020. It was an instant success with 1.5 million people tuning in to the first live-streamed event, a total of 18.5 million views across the series, leaving 100 million+ digital impressions across an average of 91 countries each week. Support from all the major social media and streaming platforms as well as media coverage from Sky News, BBC, Channel 4 News, Forbes, Financial Times, Radio 2, and many more achieved a total organic reach of 1 billion+.