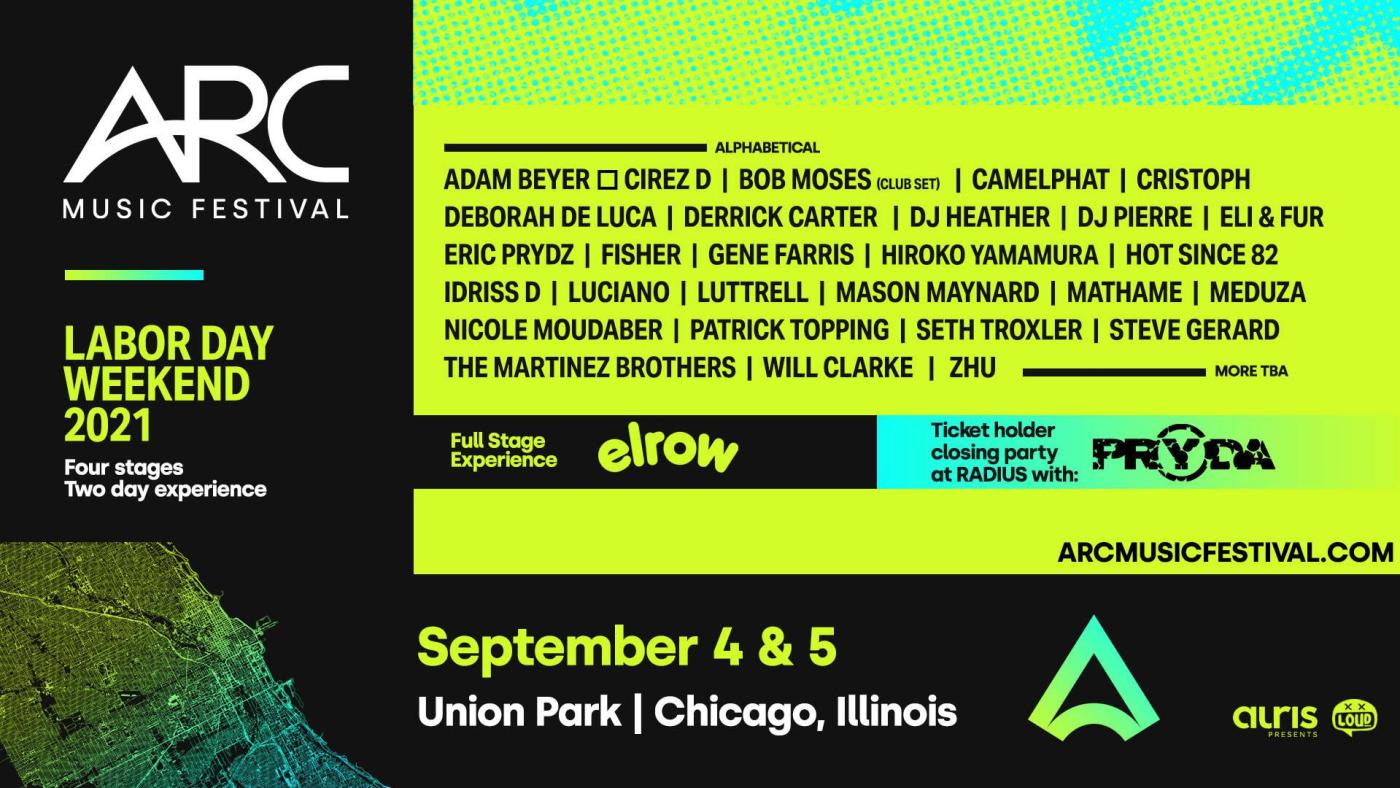 Few cities will claim to have a feeling, an idea, and a culture as their identity as Chicago can. House music is the city’s contribution to the music world, a sound that has changed form and style as it journeys, breaking down barriers and bringing audiences together. Such is the ethos of ARC Music Festival, a major immersive electronic music experience scheduled to take place in Chicago’s Union Park on Labor Day Weekend 2021, attracting a global audience.

Every atmosphere has had its own enduring influence on the sounds born from the factories of the Midwest, from the basement clubs of Europe to the beaches of Ibiza and Tulum, to legendary festival stages around the world. ARC will serve as a catalyst for electronic music’s diverse scenes and tribes to come together for an immersive and uniquely Chicago experience, marking the birthplace of house music, which, ironically, has yet to be represented on the international festival circuit.

ARC Music Festival the artists on the lineup

Eric Prydz, one of dance music’s most well-known figures, will take over the city with all three of his acclaimed projects, making ARC the first festival to feature all three of his aliases in a single weekend. Festival-goers will also be treated to festival sets from Eric’s namesake persona, Cirez D‘s US festival debut alongside Drumcode legend Adam Beyer, and his radical house alias Pryda for a closing party at RADIUS exclusively for festival-goers. Prydz’s live performances, which have gone through several iterations under the EPIC umbrella, have been some of the most revered and appreciated in rock, cracking technological barriers and wowing audiences and industry insiders alike.

Global house music legends FISHER, Patrick Topping, Seth Troxler, Hot Since 82, Camelphat, Meduza, Will Clarke, Mason Maynard, and a special club set by Bob Moses, as well as local heroes Derrick Carter, Gene Farris, DJ Pierre, DJ Heather, and Hiroko Yamamura, will perform at the inaugural festival. Deborah de Luca, Luciano, and Nicole Moudaber will represent the international techno scene, while ZHU will bring his acclaimed multi-genre live shows to Chicago. This eclectic programming will serve as an example of the ARC’s curation, bridging genres and serving as a link between the scene’s contemporary innovators and the city’s founding members of the Danish culture.

Stages and parties inside the festival

At the inaugural edition of ARC, famed Spanish party outfit Elrow will make its North American multi-day festival stage takeover debut, taking its renowned psychedelic creation and outrageous surprises to Union Park in full force. Elrow’s signature stage design, dancers, and shenanigans have made it one of the most well-known brands in the country, with bespoke shows taking place annually in Barcelona, Ibiza, New York, London, Dubai, Miami, Las Vegas, Sydney, and a slew of other major cities.

ARC will go far beyond music, providing a cutting-edge environment that reflects the host city’s culture and artistry. Attendees should expect to be guided between four virtual stage worlds by curated design elements and sculpture. The festival will also serve as a showcase of Chicago’s culinary prowess, providing a unique and enhanced experience. The recently created Auris Presents and Loud Crowd teams will lead these activities, bringing decades of experience from their individual projects at Paradigm Presents, BAM Creates, and other venues. Auris and ARC affiliate venues RADIUS and PRYSM will host intimate after-parties for ARC lovers, with others to be announced.

ARC is charting a way forward for dance music’s various creeds, including a much-needed flagship for Chicago and a new marquee date on the international festival calendar.

At ARCmusicfestival.com, attendees will sign up for the special pre-sale right away. General admission tickets will go on sale on April 15th, with travel packages to follow shortly.